Participants in the multi-faith Day of Action 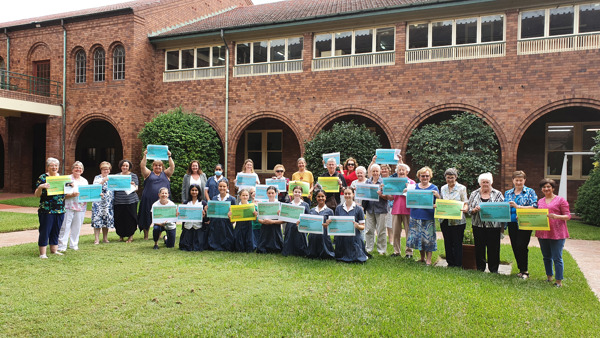 'We will enjoy and celebrate Earth’s beauty and bounty and her many species. We will honour our duty to love and care for her and add to her well-being wherever possible.' (Chapter Statement)

The Sisters of Mercy Parramatta, colleagues, friends and students held a symbolic action on 11th March at 11am where they ‘sounded the alarm’ for the Earth’s climate.

The group did this by ringing the Convent bell, reflecting and praying as part of a global multi-faith Day of Action in which hundreds of faith communities across Australia and overseas called for more ambitious action on climate change. The lead local organisation is the Australian Religious Response to Climate Change (ARRCC), part of GreenFaith International.

The Day of Action centred on a Sacred People, Sacred Earth Statement signed by prominent religious leaders such as the Former Archbishop of Canterbury, Rowan Williams, and the senior Vatican spokesperson, Cardinal Turkson. Domestically, signatories include Bishop Philip Huggins, President of the National Council of Churches, as well as senior Buddhist, Jewish, Christian, Hindu and Muslim leaders.

Climate scientists are urging the strongest action possible to mitigate climate change, hence GreenFaith International’s call for wealthy countries to reduce their emissions to net zero by2030. Governments like Australia’s need to wake up out of their complacency.

The Leader of the Sisters of Mercy, Sister Mary Louise said, following Pope Francis’ thoughts, “as Christians we are called to accept the world aa a sacrament of communion. It is our humble conviction that the divine and the human meet in the slightest detail in the seamless garment of creation, in the last speck of dust of our planet.”

ARRCC is calling for higher emissions reduction targets to be submitted under the Paris Accord, in line with a net zero target by 2030. The organisation wants post-COVID recovery spending to be centred on low carbon jobs rather than fossil fuels such as gas, and for finance to be provided to the Green Climate Fund for developing countries.